2PM’s Nichkhun, along with other artists from JYP Entertainment, has proved to have exceptional SNS performance in Thailand after they ranked well in Thailand’s Twitter rankings for 2014.

According to Thailand’s Twitter Ranking, Nichkhun’s follower count has reached over 3 million, which is twice as much as the 2nd runner up in the chart.

On April 21st, it was also reported that GOT7’s Bambam and Nichkhun further topped the rankings for Most Mentions with at least 920,000 and 890,000 mentions respectively at the Zocial Awards 2015 in Bangkok, Thailand. The awards were bestowed to those who were mentioned the most on Twitter for 2014.

Furthermore, GOT7 was also placed 7th in the category Most Hashtagged on Twitter in 2014.

JYP Entertainment expressed their gratitude for the feats saying, “J.Y Park and miss A have been actively promoting in South Korea, while 2PM has been selected in Japan’s Oricon Chart, and now all of this great news in Thailand as well. Due to all the fan’s love and support, JYP Entertainment’s artists have been most active. We will continue to repay your vast support with good activities.”

Meanwhile, starting last April 8th, 2PM started their tour 2PM OF 2PM in Japan and are planning to release their 4th repackaged album, 2PM OF 2PM, on May 20th. In the meantime, GOT7 has been traveling for their world fan-meet tour in Thailand, Malaysia, Singapore, and the United States.

In the meantime you can follow Nichkhun @Khunnie0624 and Bambam @BamBam1A on Twitter!
Congratulations to JYP Entertainment! 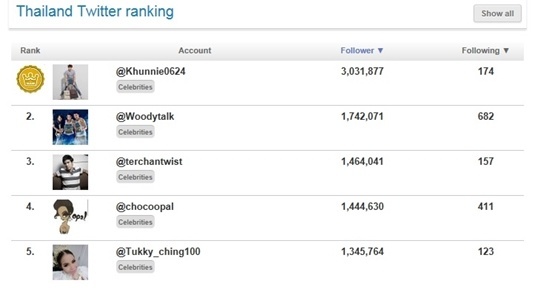