After the worrisome Instagram post  posted by Sulli just recently, her current boyfriend Choiza has come under fire for his sexual lyrics in his most recent album.

Sulli’s recent mysterious post had her fans and netizens worrying for her safety as the movie she referenced was revealed to be of a dark nature. The post was a screenshot of the female character from American movie 9½ Weeks along with the caption “Me.”

According to netizens and fans, the film, which has a dark nature, is based on a female character wanting to leave her relationship that was highly focused on sexual abuse.

In midst of fans and netizens worrying whether Sulli is satisfied with her relationship with rapper Choiza of group Dynamic Duo, Choiza’s past lyrics are being discussed once again.

Originally posted on Pann, netizens and fans criticize rapper Choiza’s lyrics in the song “Eat Do It Sleep” released in November 2015 on their 8th album Grand Carnival.

Titled “Choiza’s ‘Eat Do It Sleep’ Lyrics Are Crazy,” here is the direct translation of the post and comments below. 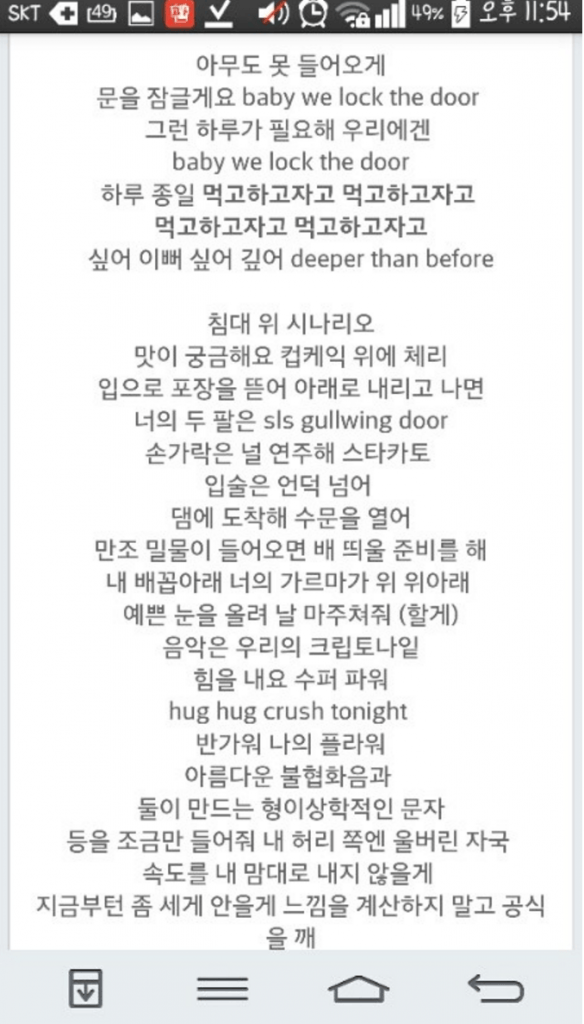 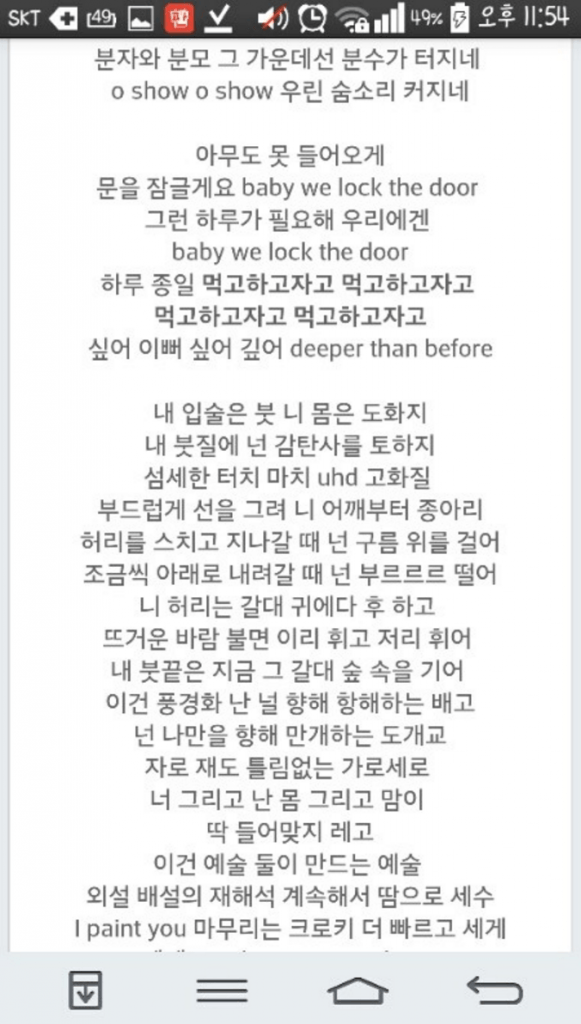 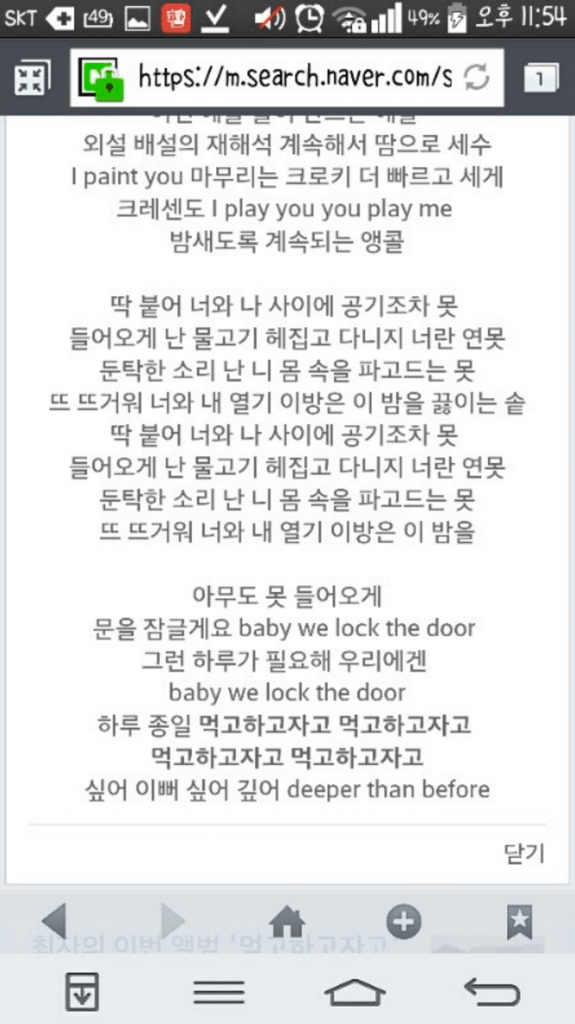 Lyrics:
Baby we lock the door
All day we eat, do it, and sleep
Eat, do it, sleep, eat, do it, and sleep
Eat, do it, and sleep
I want to do it, pretty, deeply
Deeper than before
My lips are a brush and your body’s my canvas
You’re in awe over my brush work
My detailed touch is like UHD high quality
I draw a smooth line
from your shoulders to your calves
and you walk on top of the clouds
when I pass your hips
I go down deeper
and you shiver like brrrr
Your body’s a reed
that bends and shivers when I blow in your ear
The tip of my brush is now
going deep into the forest of reeds
I’m drawing a landscape now
A faster, bigger crescendo
I play you, you play me
An encore that plays all night long
We’re stuck close together
so that even oxygen can’t separate us
I’m a fish that swims inside
your body, the pond
With a blunt sound, my peg penetrates your body
It’s so hot, your breath and mine
I’ll lock the door so that no one can come in
into this room, this night
Baby we lock the door

“I’m writing this again after the post went down.

Shouldn’t these lyrics be controversial regarding how gruesome it is?…

I saw the lyrics last night and I was shocked… I don’t know why both Sulli and Choiza are doing this but this should be rated R for listeners above age 18…. It is hard for me to look at..

I’m honestly a fan of Sulli but

I’m so sad to find out how much she has changed… During ‘La Cha Ta,’ she would come out smiling and dancing hard.. Even during ‘Pinocchio,’ she would write to Luna saying how much thankful she is… She would even call Amber a ‘hyung’ and would keep saying ‘Soojung, I love you.’ Sulli would even congratulate Victoria when she was in ‘We Got Married.’

But then all of a sudden, her mind was captured by something else and started to hurt the group as a whole. She started half-assing the dance performances and she started not appearing on dance programs. Only 4 members started coming out and all this happened.. I don’t know if Sulli was acting all these years but it really hurts me as a fan that it was meaningless that I liked her.. So many things happened but watching those lyrics… I really feel pity for her now and not hate anymore T_T Please don’t insult me, it is just how I feel.

I’m so disappointed in rapper Choiza because even without this song, many netizens probably left sexually harassing comments towards Sulli due to her age difference but he wrote such sexual lyrics without thinking that she would be a victim again.

If I was her boyfriend publicly, I wouldn’t make those lyrics and that is the least I can do for my girlfriend. You should at least think of your girlfriend or push the song back since Sulli might get harassed by netizens.

And you know Sulli’s recent Instagram right? If you haven’t, go watch it

I know Sulli is in fault too but I really hope they break up looking at it from 3rd perspective. Sulli and Choiza both disappoint me in lyrics of songs and Instagram posts.”

[ +358 / -6] F**K. You have a celebrity girlfriend and you like being mentioned for posts like this? We ALL know who he thought of when he wrote these lyrics. He really have no f*cking brain. 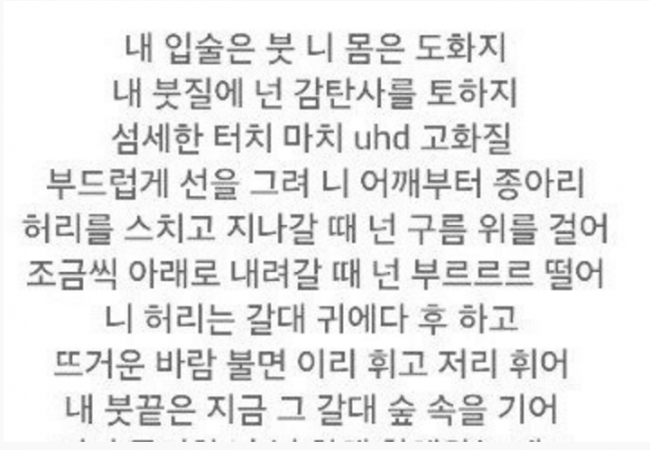 Translation: My lips are like brushes, your body is a canvas.
Due to my brushing skills, you are impressed.
Even the slightest touches are like UHD quality
I smoothly draw lines from your shoulders to your calves
When I pass your waste, you walk on top of clouds
As I make my way down, you shake like brrrr
Your body’s a reed
that bends and shivers when I blow in your ear
The tip of my brush is now
going deep into the forest of reeds