Korean netizens on Pann gather to discuss whether or not they prefer wearing bras at home.

As one of the top ranking discussion posts on Pann, Korean females discuss whether they wear a bra or not at home.

Originally titled “You Know About Bra At Home,” here is the translation of the post and the discussion comments below!

Do you all not wear a bra when chilling at home?? Until today, I never have taken my bra off unless I am taking a shower or changing clothes. But I ran into an article earlier but I found out so many women who don’t wear it!!

Even the comments! Everyone!!!! They say they don’t wear it at home! And..

Because of that I’m confused? Living a lie? Since I never have done that before.

How does it feel, not wearing a bra? For me, I think my boobs might sag so I can’t take my bra off.. When I read those comments, people say it’s unhealthy for you and suffocating but I never had a problem with health nor annoyance of the bra while not ever taking if off in my life..

I’m so curious why you guys don’t wear bras? And do most of you not wear it either???? I’m confused” 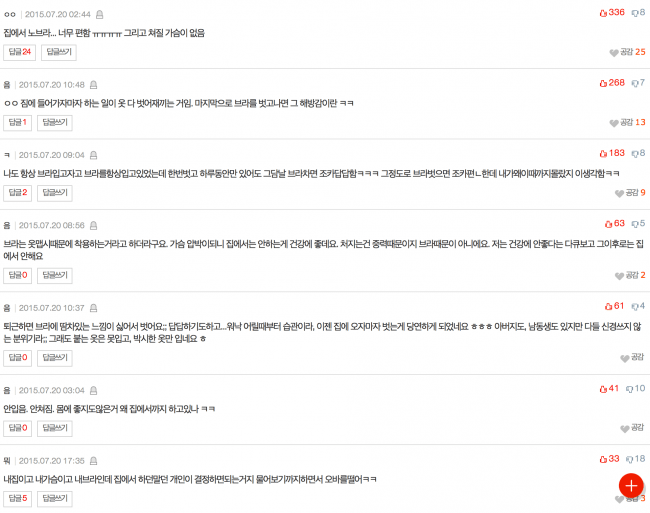 [ +183 / -8] I always wore it to sleep and never took it off but even if you take it off for one day and wear it the next day, it feels so freaking suffocating. hahaha. It is that comfortable when you take it off. I thought to myself, why didn’t I know about this until now haha

[ +63/ -5] I heard bra is for when your wearing your clothes. But I heard since it pressures your chest, it is unhealthy for you. Sagging is for the gravity not because of the bra. After watching a documentary that it is bad for you, I never wear it at home.

[ +61 / -4] After getting off work, I take it off because I hate the feeling of sweat inside my bra;; It is also suffocating.. I’ve had this habit since I was young so now it is habitual that I take it off as soon as I get home hahaha My father and little brother is home but it feels like they don’t really care;; So I always wear tight clothes at home ha

[ +33 / -18] My house, my boobs and my bra so why bother asking this online when you could make your own decision haha