In episode 240, the Running Man members return to their 20s as they help Suk Jin complete his missions to reach a full 100 points! With the help of actors Kim Woo Bin, Kang Ha Neul and 2PM’s Junho, these members are faced with their toughest challenge yet as they work as team to help Suk Jin win.

Check out our TOP15 moments from this week’s episode below! Warning: Spoilers Ahead!

1. Running Man revert back to their 20s
Oh my…. the members have never looked younger. Or should I say older? haha 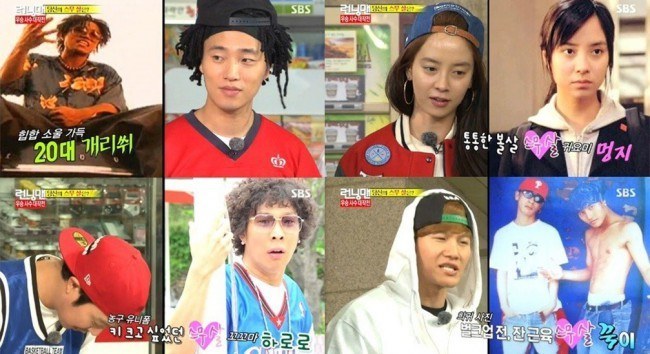 5. Jae Suk’s remark
Jae Suk asking if the non-Suk Jin team’s eyes were alright because they all wore glassy looks.. oh dear. Remember, you’re all on the same team!

6.Ha Neul’s terrible luck
Ah poor Ha Neul, striking out by both the wrong answer and falling off your stool from the water dump punishment… at least everyone got a good laugh from it ¯\_(ツ)_/¯

7.Ha-Kwang-Kook nodding their heads along to Ha Neul’s voice
The trio, all in a line, nodded their heads to the Ha Neul’s sweet voice

8.Suk Jin’s forced dancing
It was hilarious to see Kwang Soo and Haha forcing Suk Jin to jump up and down. Hey, whatever it takes for him to reach 600 steps.

13. Attack of the Hunters
Everyone running at the speed of light while yelling at each other to NOT run away.

14.Gary’s (un)willing sacrifice
Ah, Haha bartering with the hunters, asking them to take Gary over him. After being quickly taken, Gary, feeling the strong betrayal, asked the hunters to “Please take care of them for me.” Don’t worry Gary, Haha joined you a mere five minutes later ㅋㅋ