ABSOLUT, a vodka company, is receiving harsh criticism for it’s poor choice of imagery for it’s most recent Facebook post.

President Park Geunhye has finally been impeached after weeks of peaceful protests by the Korean public. However, images of these acts of democracy are being manipulated for marketing purposes much to the dismay and outrage of the Korean people. 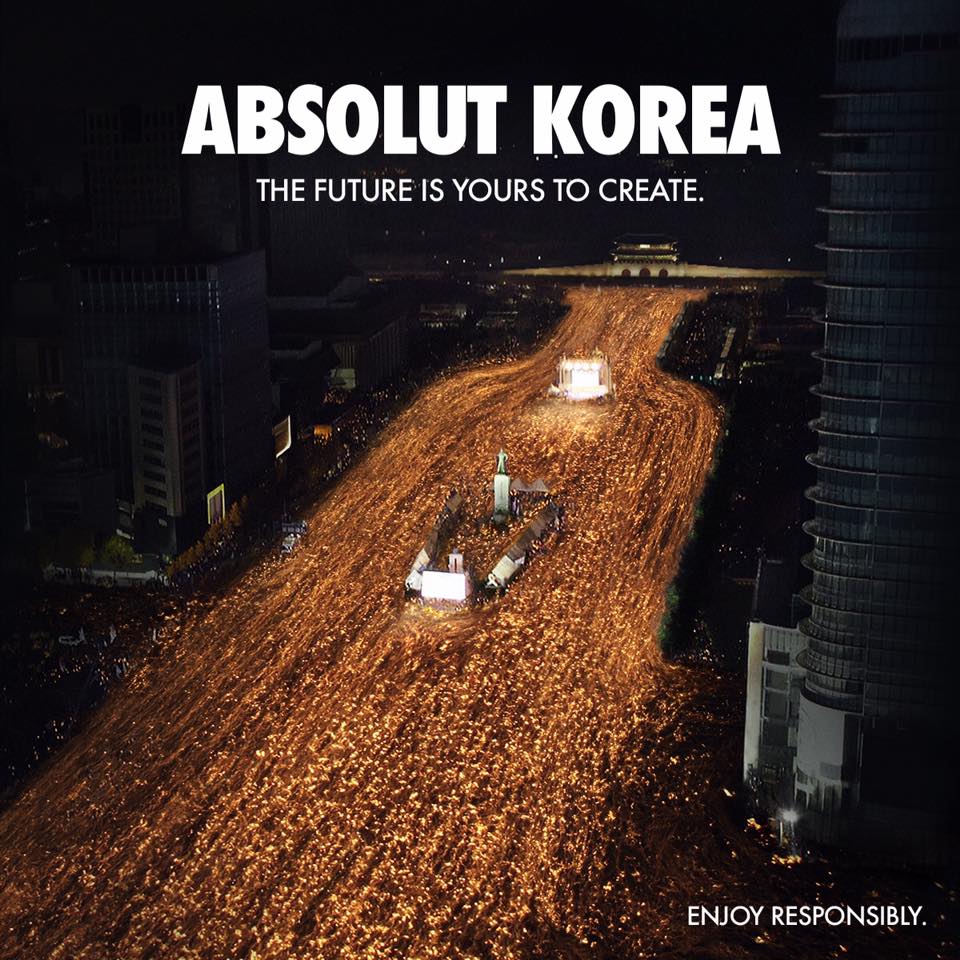 ABSOLUT uploaded the above image to it’s Facebook page a few hours ago. It has quickly become a heated topic with the majority of comments criticizing the company for their choice of imagery. The public viewed the photo of choice was inappropriate for a vodka ad.

Korea had been in turmoil for the past weeks as scandal after scandal was revealed of their president and the White House. Even celebrities, usually neutral in political standings, became vocal in their stances against the current leadersthip of the country. Especially as survivors and family of the Sewol Ferry Incident were also part of these protests, the public hugely berated the company for being insensitive to the grief of the country.

We have translated some of the most popular comments left on the post on from ABSOLUT Korea‘s facebook page.

[+1433] Hmm..If Absolut Vodka had supported the demonstration even a little bit this advertisement would portray the ‘Strength of Korea in their fight for a democratic future’ very aptly mixed with the company product, but they are just using the situation and event for profit. This makes even me, a foreigner frown.

[+ 319] This doesn’t look good no matter how you look at it. The families of the Sewol victims are still there. That picture is a symbol of a struggle that is still ongoing. Did they have to use this for an advertisement…It might appear differently to different people but I believe that the use of such image by an alcohol company is wrong.

[+ 217] Oversensitive? As a person who is educated in advertising, I don’t even see what the insight for this ad is. What does this gathering have anything to do with vodka? The fact that they used Korea’s struggle at such time as the object of an ad….I don’t even see what their target is. The copy is good? The copy being good doesn’t make everything okay. Think about what this ad really shows.

[+ 167] If this was a Worldcup match or a concert it would have been amazing but if you know what this picture signifies they should not have used it to market alcohol.