The group released their debut mini album Limitless on January 9 and it has quickly taken over both national and international charts. It was number 1 on both Billboard‘s World Album Chart and the Gaon Chart. 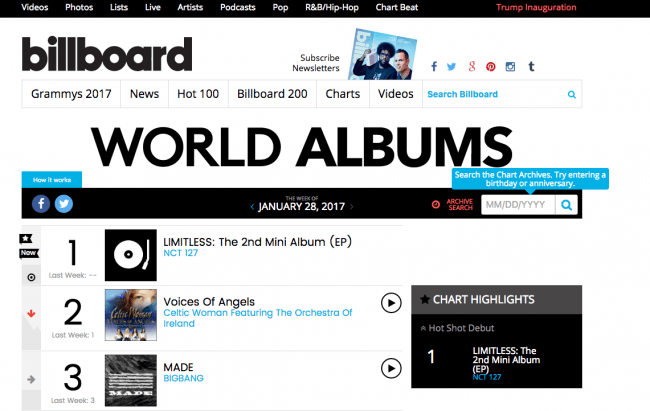 They even managed to surpass BIGBANG’s album MADE, which now ranks third, prompting people to take a listen to the album that could outrank the mega hit group. Consequently NCT 127’s album started ranking 1st on iTunes in Finland, Thailand, Singapore, Indonesia, and Vietnam.

Worldwide, they have made it in to the top 10 in 13 countries, including China’s most well-known music chart, Xiami Music. There, they took the number one spot in both the K-Pop chart and the New Music chart.

In South Korea, NCT 127 has established a strong reputation as the ‘2016 Rookie Kings,’ having received multiple awards from several of last year’s award ceremonies. They won the Rookie Award from the Asia Artist Awards, Mnet Asian Music Awards, and The 31st Golden Disc Awards.

Check out their music videos below!