Crush‘s most recent single featuring Block B‘s Zico as the rapper is a hit on the charts!

On July 11th at 5:30am KST, Crush’s “Oasis” was seen in #1 on  several online music charts, including MelOn, Mnet, Bugs, Olleh, Genie, and Naver Music on both their real-time and daily charts. For Soribada, he was #1 in the real-time charts and #2 on their daily charts while he was found in #1 on monkey3’s daily charts. 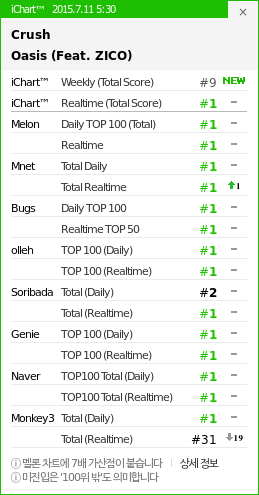