JYJ’s Junsu has suddenly announced that he will finally be getting married!

On April 1st, Junsu made a surprise announcement via his Twitter account, writing,“This might be out of the blue… But I’m getting married. My fans wanted me to get married when I was 77 years old and I apologize that I can’t follow their wishes. I have dreams and hopes to be the head of a household, so you will understand, right? Please support me^^”

He also posted a link to his wedding invitation at the end of his Tweet as proof that he wasn’t lying about his wedding.

Junsu’s wedding invitation turned out to be a link to Naver that defined April Fool’s Day, as the first line in the link read, “April 1st. It’s a day when you pull pranks with a light joke or a harmless fib. It originated from the West and it is also known as ‘April Fools Day.'”

The artist also continued his ruse with a silly conversation in reply to one of his hyungs who congratulated him.

[Junsu]: Thanks, Wonsik… I’ll marry on the moon after making a reservation of Toscana’s package… So please buy the ticket for a spacecraft~~ Ah, I could meet the rabbit if I go there, so prepare some carrots for him

[Wonsik]: But…you can go there 40 years later. So I reserved it for you ㅎㅎㅎㅎ

Junsu joined the ranks of other K-Pop idols and many other people who pranked their friends and followers on April Fool’s Day, including Dal Shabet, Boys Republic, f(x)’s Amber, and many more. 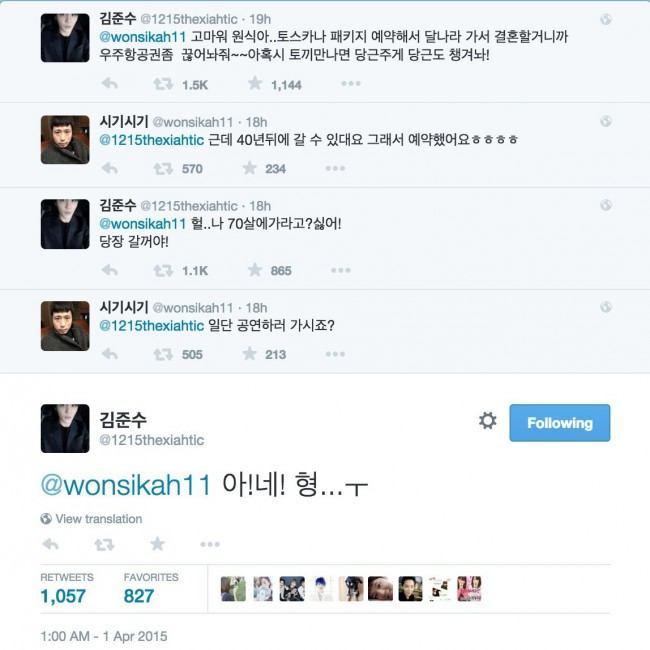