Lee Hi is quickly rising up the charts and is well on her way to dominating the charts with her latest title track “My Star.”

As of April 20th at 8:30am KST, Lee Hi is seen topping real-time charts on seven online music sites including Mnet, Bugs, olleh, Soribada, Genie, Naver Music and monkey3 in #1 while ranking in #4 on MelOn.

The YG Entertainment soloist recently released the complete version of her album SEOULITE (April 20th, 12am KST), releasing the music video to the leading track “My Star” which features an appearance by rapper One as her on-screen boyfriend. 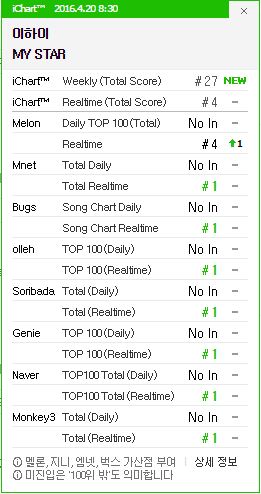